I’ve always tried to be consistent with my kids. I make my share of parenting mistakes, but my kids always know where I stand and what to expect from me. Except when it comes to the neatness, or shall I say, messiness, of their rooms. I just can’t seem to take a stand and stick to it. When they were younger, I made their beds and put away their laundry. I told them about it if they threw clothes on the floor, but I would pick them up. (I guess that’s where I went wrong.) As they grew, I realized that they needed to take some responsibility, so first I turned to make the bed over to them. Guess how often the beds get made. Then I found myself really busy and wondering why I was putting away laundry for three perfectly capable young people. Isn’t it enough that I wash it and fold it and deliver it to them? So, I turned that over to them. So now the older two only put their laundry away when an ultimatum is issued.

As for the overall neatness of the room, I’ve tried various approaches, all of which are variations of the concept that their rooms are their territory and their responsibility. Make as much of a mess as you want, but I’m not going to clean it up. I think that’s a great approach from the perspective that it puts the decisions and the consequences in their hands. Except, I just can’t stand it! I promise them it’s up to them and then I either go ballistic on them because their rooms are pigsties or refuse to even walk into their rooms because I can’t stand to see the mess, or not let them go somewhere until they straighten up, or I get really crazy and clean up their rooms myself (like I did last week). 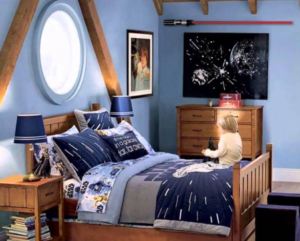 Obviously, there is nothing consistent in my handling of this issue. And, I know in the grand scheme of things, clothes all over the floor isn’t such a big problem. But, it drives me crazy! So, “Dad”, how does your family handle the bedroom issue? Rach, help me out here – I know I’m driving my kids crazy. What’s a fair approach?

Ah, the ‘clean room’ thing. “Mom,” today I bring you a message of…well, utter hopelessness, with a little scootch of “don’t sweat the small stuff” right at the end.

We’ve been through it three times now, and we’re suffering through the third time now with The Elf, who I swear looks at me like I’m speaking Martian when I say, “clean your room.” “What?” her blank expression tells me. “What is this thing you call…’clean’? And I’m in a…what did you call it? ‘Room’? I don’t…”

We’ve had great success, I think — so far — in instilling a sense of fair play, compassion, empathy, and right action in our offspring. It’s borne us by their behavior on a daily basis, and I love them and am proud of them all the time. But not a single solitary strategy, tactic, approach, or manipulation ever made them clean their rooms. Not for more than a week. Not ever.

Leaving it alone until it’s a stinking pile of sticky-things doesn’t help. Doing it for them and hating yourself doesn’t help. Punishment, reward, lectures, grandparental intervention, weeping, shouting, and withholding everything from computer games to TV to locking them in with the stinking pile of etc. etc. … doesn’t work. Not more than once. And now that’s we’re lurching through the same challenge with the Elf as we have with the Other Ones, I’ve decided to do the one thing I haven’t tried before — the one thing that isn’t an actual felony, that is.

I visited our oldest daughter at her home recently. It was astonished at how reasonably clean and well-organized it was, and how she actually seemed to be doing her laundry and washing on regular basis. A few days later I visited the Valkyrie at college, and found her portion of the dorm room was neat as the proverbial pin, and that she had a drawer full of clean clothes she had actually — had actually (I’m sorry, I’m choking up a little here) — actually washed by herself. So in both cases, all those years of screaming and threatening and Sturm und Drang…well, it didn’t much matter. When the real rubber met the actual road, they responded to the deep-training that they received from the rest of the house and the rest of their lives to date. Turns out they take care of themselves just fine.

So in this one instance? I say let it go. Not a popular opinion, I know — not even in my own house — but if the kid is doing well in all the important areas, if he or she is treating other people well, staying away from the dangerous stuff, setting and achieving personal and family goals…then just let the room be the room, with all its issues of power-struggle, ownership, and territoriality, and only intervene in that last moment before the rats or the Health Department take over. In short: don’t sweat the small stuff, and you just might all survive to clean another day.

My parents have never forced me to clean my room. They’ve asked me to tidy up when the company is coming over (so, when my grandparents take over my room), but other than that’s it’s always been up to me. So, when I was a kid my mom made my bed. Then when I was a young teen my room was piled with CDs and clothes. Now (as an older teen), my dorm room and my room at home are clean and mostly tidy. It makes a big difference in a small room. 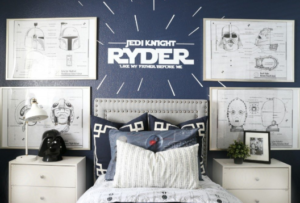 I like what my parents did, they just kind of left it alone. Every once in a while they asked for me to be neat. I’ve always kind of got the feeling that they just don’t care about my room. I guess it really depends on how much you see the room. And how much you want it to be neat. If you make policy like they can’t go out (or have dessert, watch TV, play a video game) unless their room is spotless, and if you stick to that – then your kids will, hopefully, start keeping things a bit tidier.

I think a fair approach is to pick one. Does it make a huge difference to you? Then get a rule going. If it only kind of matters? Then don’t make a rule and ask for cleanliness every once in a while.

Well, in my house, I am so clean that it really isn’t a problem. (I can’t even keep a straight face trying to type that since I am the exact opposite of clean!) The majority of teens have messy rooms, especially younger teens – that age group, for some odd reason, seems to be the worst in terms of room cleanliness. Somehow, it just doesn’t bother us, but parents (or at least my parents) it drives crazy! The only reason my room is ever even a little bit tidy is that my mom refuses to come in if it’s too messy. So, no matter what, there will be folded laundry in the basket (currently I am staring at 2 huge piles) that I haven’t put away and my desk always is cluttered, but if you catch me at the right time there might not be clothes spread out across my entire floor. I think pretty much all of my friends have messy rooms so it really isn’t a big deal in my mind, although my mom, I am sure, would beg to differ.

I think that our rooms are our own place to be a complete slob if we want to be. So, parents, I would just ignore them and let us throw our clothes across the room if we want to. Also, know that you’re certainly not alone, it’s not just your teen. So, when they say no one has clean rooms, they’re not exaggerating at all. Bottom line, you may have to just suck it up for these years and let your teen be themselves in their room. Remember, “Dad,” says it will get better when we’re older.

Written By
Diane
More from Diane
Sooner or later all top lifters after years of experienced training and...
Read More